1 in 20 rockets fail and that usually happens within the first two minutes of launch. In mere seconds, the flaming debris and unspent rocket fuel would be catastrophic to the Seashore that is densely covered with highly flammable natural fuel (vegetation).

“In the event of a catastrophic failure…Such a failure or mishap could have long term effects on the island, potential impairment to the island’s natural and cultural resources, and major consequences for enjoyment of the island by future generations…”

August 25, 2014
Kodiak
Exploded over the launch pad at 4 seconds

September 1, 2016
Cape Canaveral
Falcon 9
Explosion during a test on the pad

The site for the proposed spaceport is very heavily contaminated, is on the Satilla River waterfront, and is owned by Union Carbide Corporation. The 1971 Thiokol disaster occurred on this property. The known contamination includes munitions waste, unexploded ordnance, and pesticide waste. With each vibration from a launch, groundwater, soil, and waterway contamination is likely. Due to being heavily contaminated with hazardous materials it is subject to an Environmental Covenant with the Georgia Environmental Protection Division. The site includes a 58.16-acre toxic landfill, in addition to the massive widespread contamination, that requires close monitoring and remediation to ensure that it its contents do not make their way into water sources.

Within the boundaries of the Cumberland Island National Seashore is the longest running loggerhead turtle project in the world. Founded in 1964, this conservation endeavor still collects data vital to the preservation of the species. In Georgia, 25% of loggerhead nests occur on Cumberland Island. Six species of federally protected migratory birds and shorebirds including: Bald eagles, Piping plovers, and Wood storks. Marine endangered species in the area include: 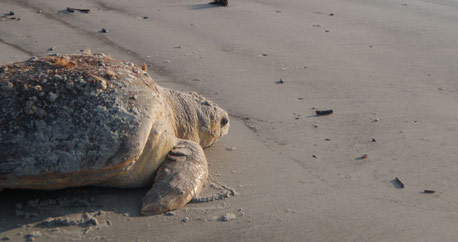